Black Swan Events and Investment Waves - What do they Mean for you?

Black swan events are unexpected happenings in financial markets that have a big impact.

During my working life I have been “fortunate” to witness two of the biggest black swan events of the past 50 years – the decision of President Nixon in 1971 to cancel the convertibility of US dollars into gold at a fixed price, and the GFC.

Both had a profound effect on investment markets, with big implications on the best way to invest your savings.

The first of these, the end of the gold standard, ushered in a period of change and volatility in financial markets, with high inflation and high interest rates being dominant. I was working in stockbroking and money markets at the time, and saw the effects from close quarters – although I was too young and inexperienced to grasp the full extent of what was happening.

From the early 1970’s until the mid 1980’s, inflation hovered around 10 per cent and interest rates rose consistently. The 10 year bond rate rose to over 16 per cent in 1982, and did not drop to single digits for nearly 10 years. Hands up everybody who remembers those 18 per cent mortgages. Yes, you millennials, it really happened.

This was an era of fixed interest investing.  Anybody investing in Government Bonds in that time did well. Maximum security, and high returns.

Fast forward to now, and what do we have. Almost the exact opposite. A time of low inflation (maybe verging in deflation), and record low interest rates (you don’t need me to remind you).

Anybody relying on interest rates to fund their living expenses will almost certainly be eating into their capital at a rapid rate.

By contrast, shares, taken across the whole market, offer attractive yields – especially after factoring in valuable tax credits. Just as the period from the mid 1970’s to the early 1990’s favoured fixed interest investing, we are now in a period favourable to shares.

And the lesson is?

Don’t listen to multi-decade averages, or those who talk about things “normalising” in the near future. We are in a “new normal”, which is distinct from the “old normal.”

How long will this last? Nobody knows (and be careful listening to anybody who pretends to know). But one thing is for sure – at some point it will all change to something different. 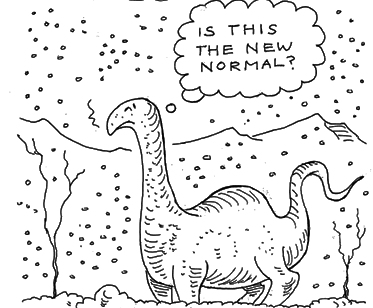